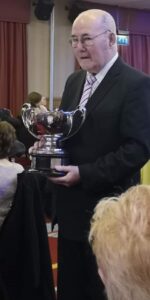 It is with regret to advise you of the death of Michael Wilson (Collingwood). Michael sadly passed away on Friday evening. Michael had been a long standing stalwart and member of the Collingwood Bowls Club for many, many years.

Michael represented the county, across all levels and teams (Armstrong, Alsop, Muras and Middleton), and notched a centenary of appearances, mainly in the Middleton/Muras team. Michael was also part of the teams that won the Middleton Cup during the 1980’s.

Michael had also served for many years on the County Executive, and during this tenure also managed the Men’s County Alsop Team, where they toasted success in 2018.

Michael was a gentleman on and off the green, and helped many bowlers at the start and through the careers. Our thoughts and condolences are very much with Michael’s family and friends, but also to his wider family – the bowls one.

RIP Michael, you will be missed.

Funeral Details: 19th October at 12 midday at St. Joseph’s RC Church, North Shields. There will be 76 people allowed in the church after the family. Then to Tynemouth Crematorium for 12:45pm. Wake back at West Allotment Social Club.