As you are very much aware the county finals were played over the weekend (30th & 31st July), with St. Georges’ BC being the hosts throughout the weekend. I’ve already updated posts with the ladies, but here are the remainder.

On Saturday we started with the Men’s 4’s, county mixed pairs – the Men’s 4’s saw home favourites skipped by Alan Stewart, taking on former club member and now Ashington’s George Richardson. The game did not start well for the home team, as were 7 – 2 adrift at 5 ends. But the 2 shots they scored proved to be the only 2, as Ashington scored on the next 8 ends to take their first county title 22 – 2. The rink was Lee Taylor, Bob Dodds, Christian Lowes and George Richardson. On the losing side, it had probably the youngest player to play in a county final (that is the main 4 or 5 events), with Luke Jameson, aged 16 leading off for Alan Stewart, the other two players were Fred Short and Paul Slaughter.

Across the green the mixed pairs final was taking place with former runners up in Health & Security’s Christine Gardner & Rory Adamson playing North Shields West End’s Sally & Rob Campbell. The title looked to be heading West End’s way leading by 7 with 2 ends to play. But Adamson collected a 7 to draw level playing the last end, and then a single to take the title.

In the afternoon session the Champion of Champions Final took place with New Delaval Knight’s Ant Barke securing a first county title with a strong display over Collingwood’s Martin Hayden, with Barke winning 21 – 6. On to the pairs where multiple previous winners and holders Gosforth’s Josh Minto & Chris Yeomans played Collingwood’s Peter Dawson & Ian Brown. After tight early exchanges where the score was 3 – 2 to Brown after 5 ends, but Brown would only score on one more end up to 10 ends, with Yeomans now leading 10 – 4. The lead was extended to 14 – 5, but Dawson & Brown scored on the next 4 ends to narrow the deficit to 14 – 11. However Yeomans scored a vital double on the 17th end to lead 16 – 11 and the game was conceded. Congratulations to Josh & Chris, yet again! But also to Peter Dawson and Ian Brown, it is great to see both of you back on the green and playing well – well done.

On to Sunday – and 3 Men’s finals in the morning, The first was the 2 Bowl Singles and we were going to have a new champion, as there were 2 new players to the finals – with Roy Stephenson (NW) and Paul Timney (CN). In a close contest there was very little between the players, with the score-line being 7 all at 10 ends. But Timney then took a slender lead 10 – 7, but Stephenson hit back scoring 3 singles on the next 3 ends to draw level at 10 all. At 19 ends Stephenson led 13 – 12, and secured a double to take the crown.

On to the Under 25 Singles, where Benfield’s Matty Bishop took on Gosforth Richard Curtis. The game started well for Bishop, scoring a 3 and then a 4 on the first 2 ends, but Curtis hit back to score a 1, 3, 2, 3, 3 to lead 11 – 7. This type of pattern continued as the game was completed in another 7 ends, with Curtis taking the title 21 – 12. Both players DO qualify for the National Finals at Leamington Spa later this month. The other game in the morning was the triples with club colleagues taking on each other – Gosforth’s Jimmy Curtis playing holders Chris Yeomans, and this was a crazy game in a way, with no fewer than 53 shots across the 18 ends, with counts of 4’s, 5’s, 6’s and 7’s! The game started well for Curtis, where Curtis dragged the jack with his last bowl to pick up a count of 6, the next end they scored a double. The 3rd end looked good again for Curtis, as they lay 4 shots, but Cooper hit the head and cleared the bowls out. Curtis however drew the shot with his last bowl, but Yeomans removed it to pick up a count of 4. Yeomans then scored a single, double and then a 7 to lead 14 – 8. But the next end Curtis scored a 5, then 2, 1, 1, to lead 17 – 14. Yeomans then hit back scoring 10 shots over the next 5 ends, to lead 24 – 19. But Curtis was not to be denied and immediately scored a 5 to draw level at 16 ends, and then a 4 on the 17th end to lead 28 – 24. On the last end Cooper tried to get the jack off the rink, but only managed to put it in the ditch and Yeomans only scored 1 shot. So Steve Pallas, Brian Houghton and Jimmy Curtis won 28 – 25 and took the county triples title.

On to the afternoon, and saw arguably the blue riband event in the 4 Wood Singles – with Gosforth clubmates Josh Minto taking on Chris Yeomans. The early exchanges were relatively tight, with the score being 4 all after 6 ends. Yeomans then edged ahead collecting 2 trebles to lead 12 – 7. Minto then lay 2 shots with only Minto to play, unfortunately Minto turned Yeomans in for shot, and from this point Yeomans took control, scoring on 7 of the next 8 ends to take the title 21 – 8. With Yeomans collected his second 4 Wood Singles title. However like the under 25 singles BOTH Josh & Chris will be representing Northumberland in the Bowls England National Finals at Leamington Spa later this month (you may ask why, or how – this is due to the number of entries that entered – which allowed 2 entries in this event).

I would like to congratulate ALL players that took part over the weekend – and especially those perhaps to lift a county title – well done.

A final thank you goes to St. George’s BC for being our hosts – thank you for all your help, co-operation, work over the weekend – it is very much appreciated. 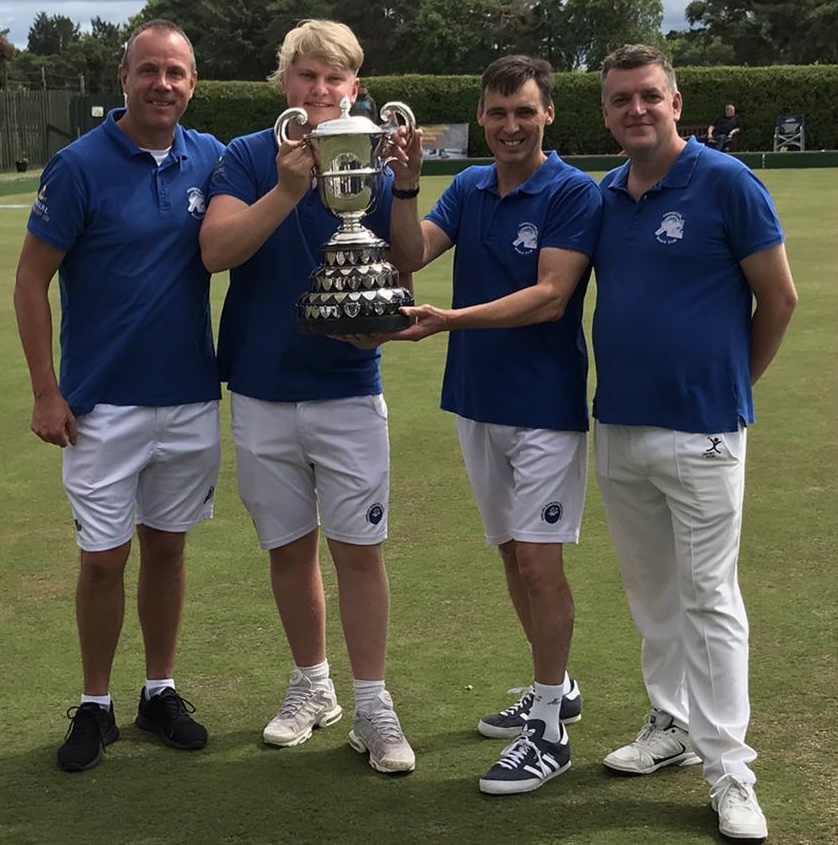 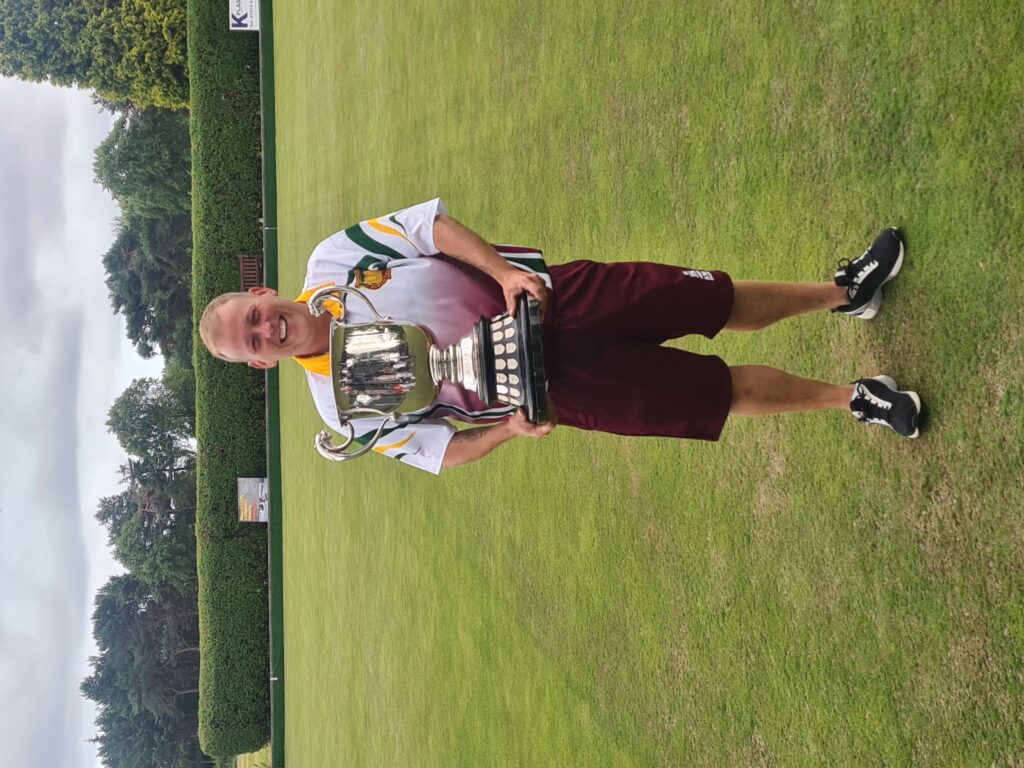 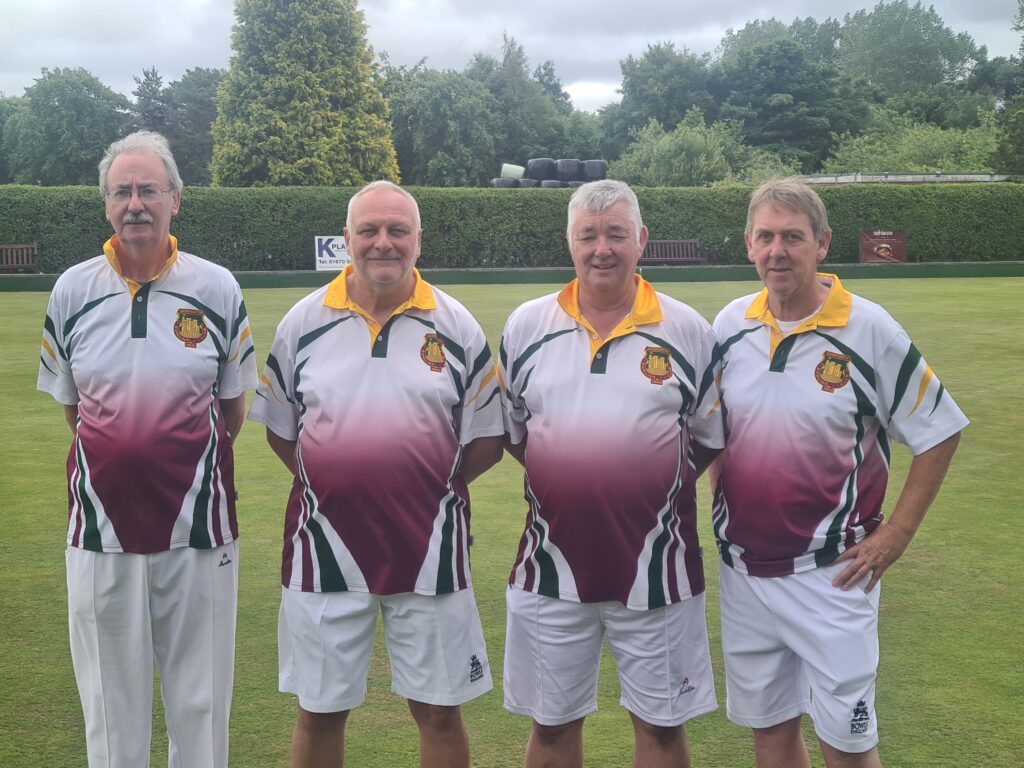 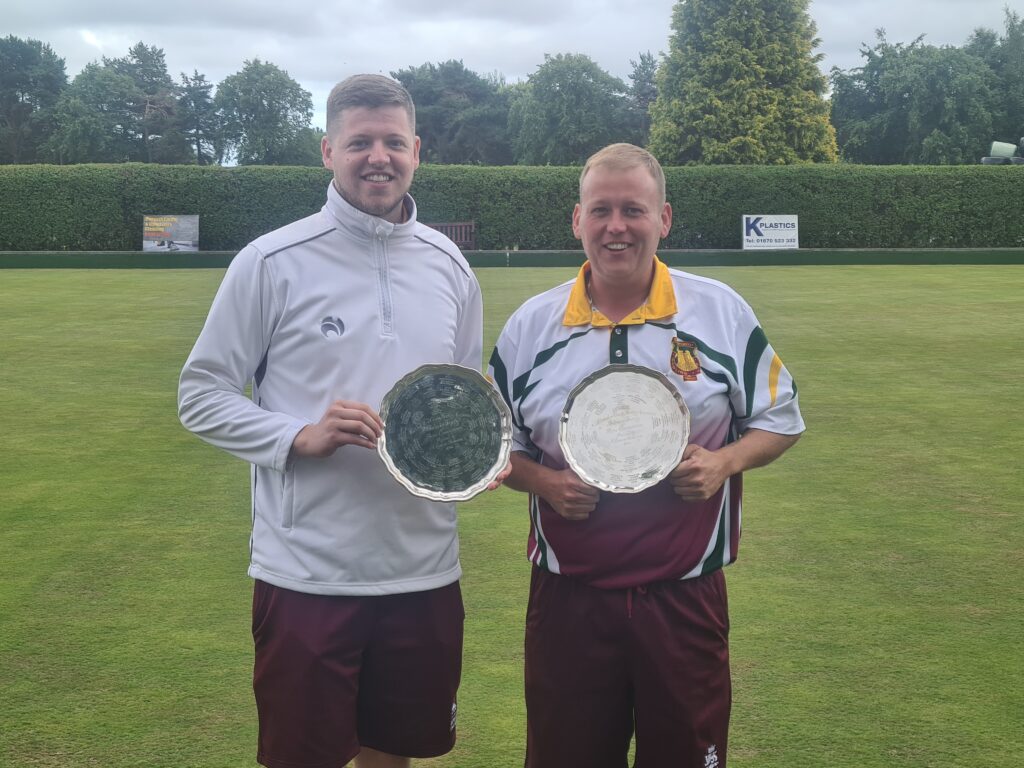 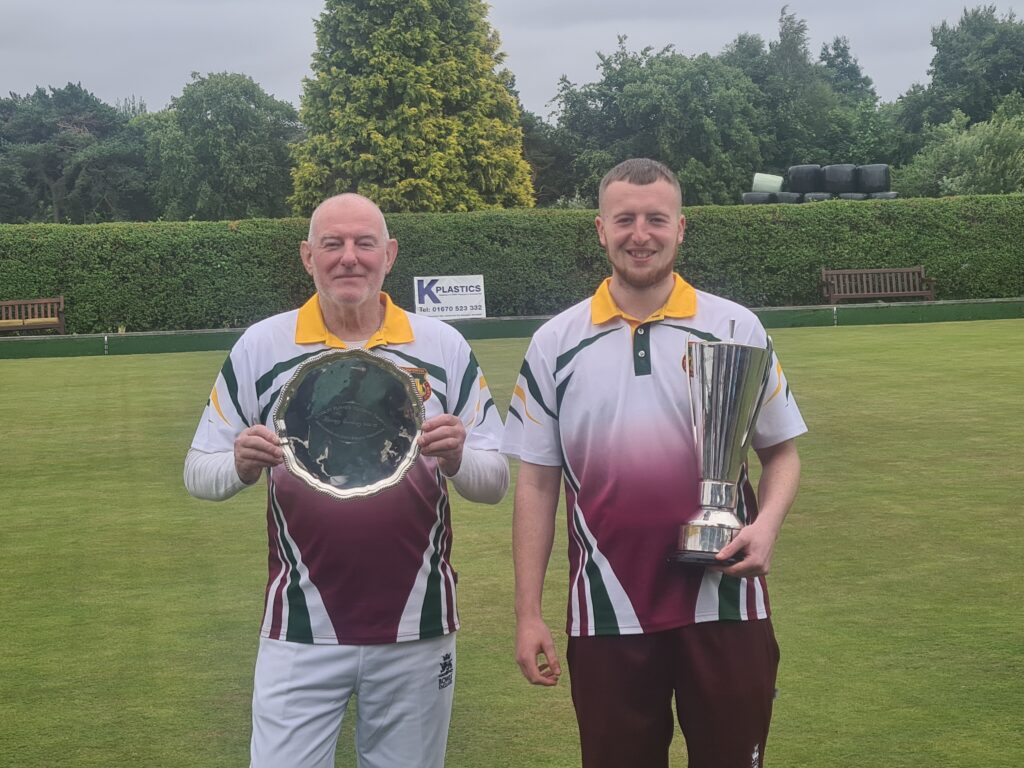 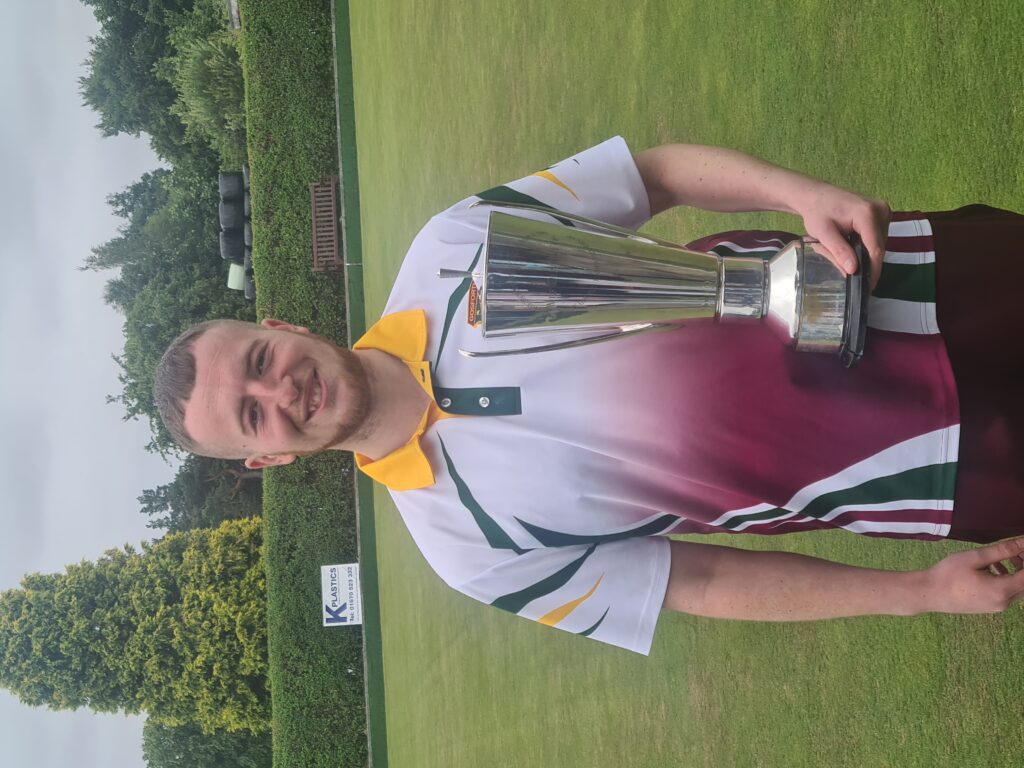 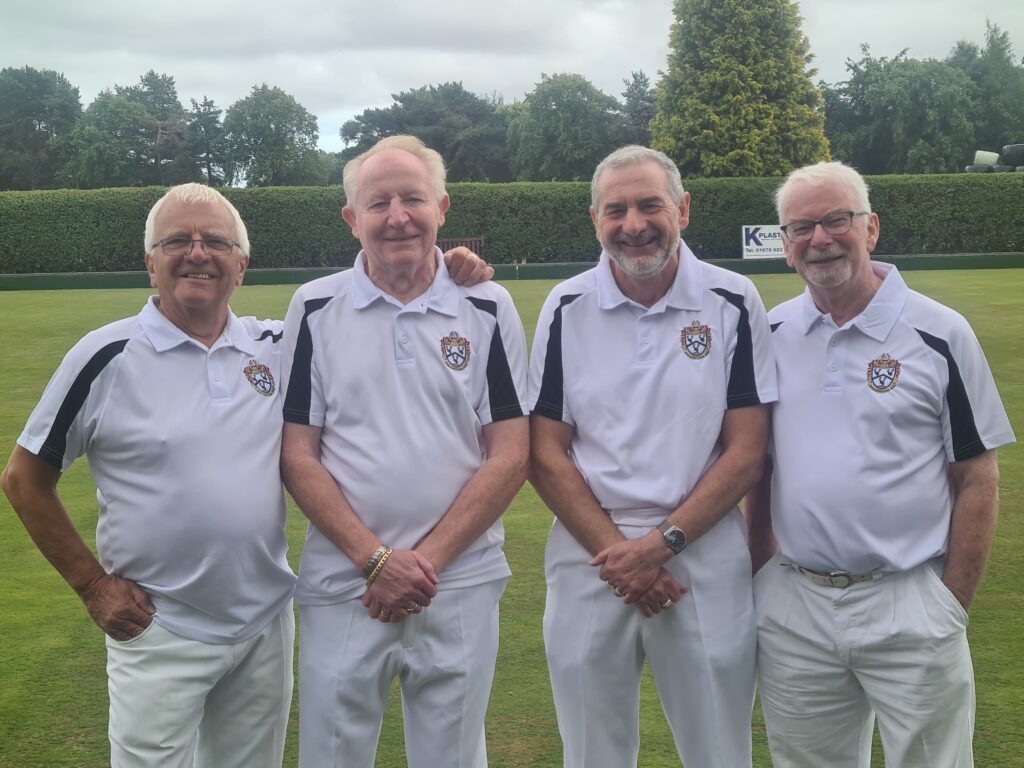 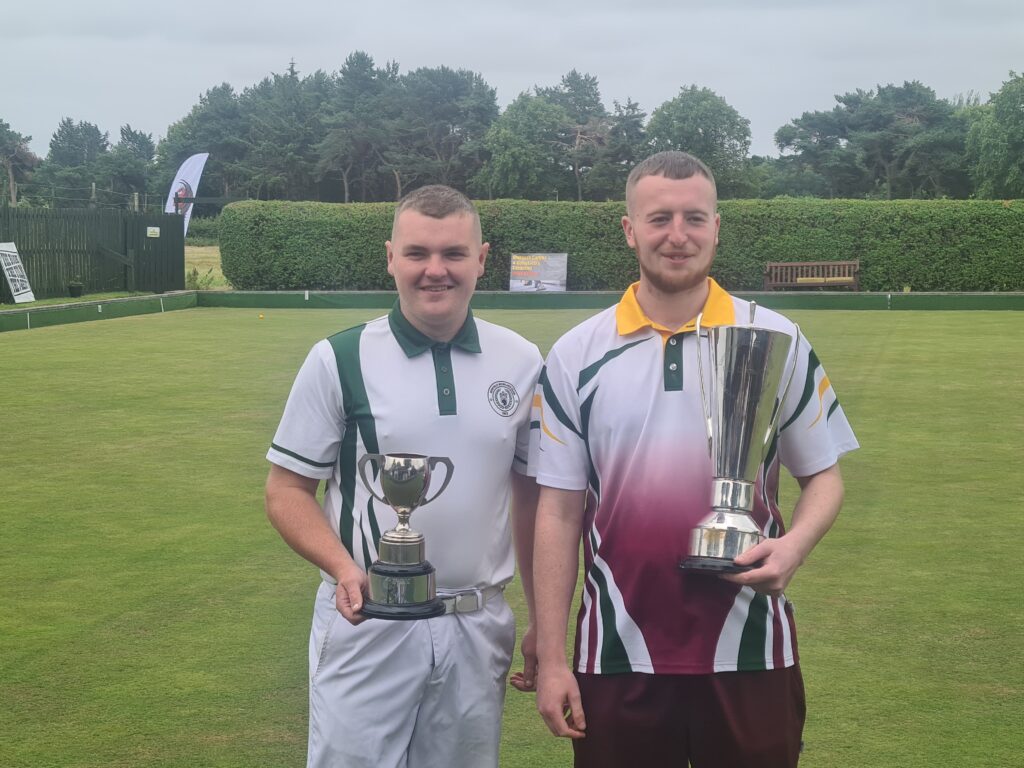 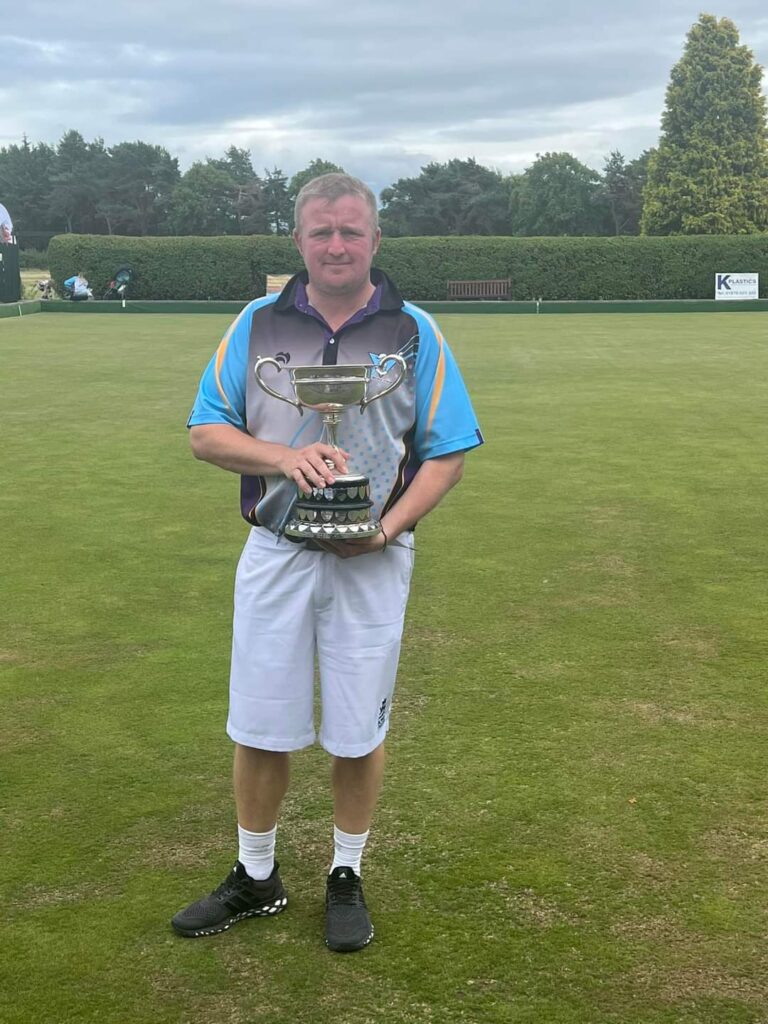